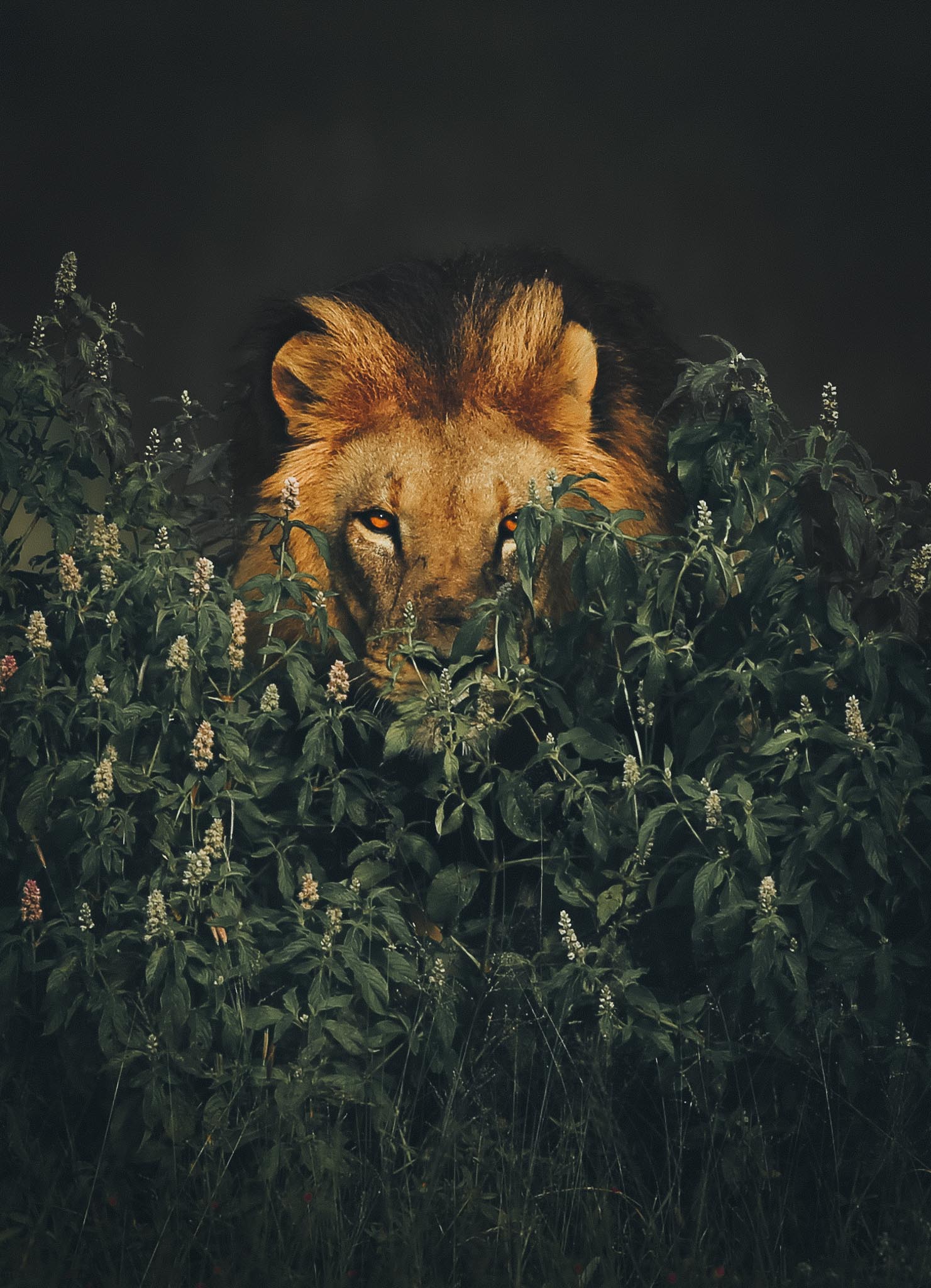 Walking with the Bushmen

Hello my name is @pie Aerts

Growing up in the West, understanding the strong connection between humans, animals and nature is not something there was much emphasis on Learning…

I was able to spend a few weeks in the walking with the Bushmen of Africa, an experience that opened my eyes to exactly how much of a shame that is.

Let me tell you why;

After seeing it appear in several BBC documentaries for over a decade, it was finally time to touch ground in what seems to be one of the biggest inland freshwater deltas of our planet. One big mysterious maze of papyrus reeds, water channels full of lilies and swamps dotted with crocs, hippos, elephants, and lions. Welcome to the Okavango Delta. The scale and magnificence of these slushy swamplands are unreal. Vast wetlands full of life as far as the eye can see, the annual flow of water, the daily drama of its wildlife and the untouched wilderness in its purest form. It’s hard to put a finger on it, but there’s something so elemental to this place. It’s like another dimension, one that’s non-existent in the western world. 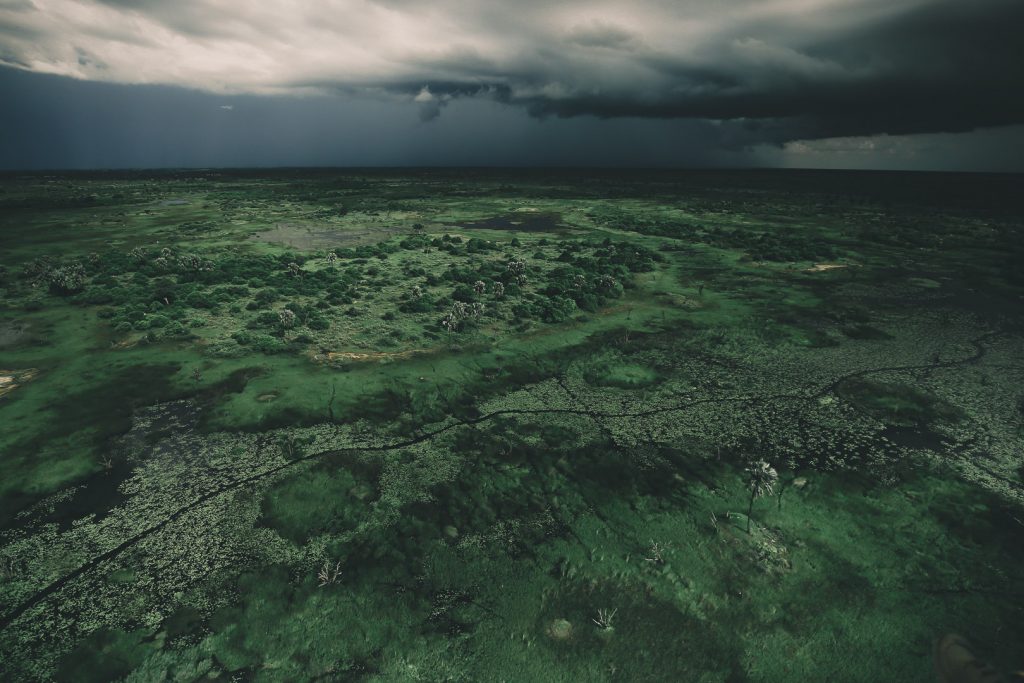 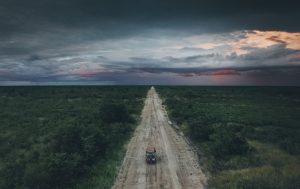 Unlike the large, commercialized parks…

Unlike the parks in Kenya and Tanzania, most Botswana game reserves only allow a certain amount of vehicles per day in each park. And that’s how we found ourselves spending the entire trip completely alone in the Botswana wilderness. Just us and the bush. No other cars. No other people.

Trackers are well-trained, intuitive and have spent years perfecting their craft. We had the privilege of experiencing these innate skills with while the trackers chase their animals. Thanks to the epic bushman skills of our guide Kane, the personification of Bushkarma. A man that feels, smells and reads the bush. Where other guides just follow the freshest tracks, it felt like the animals found him instead of the other way around. 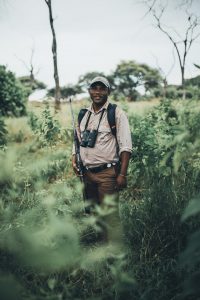 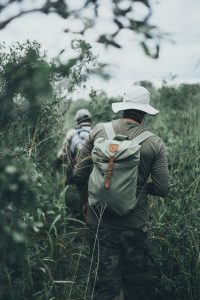 We were blown away by his ancient tracking skills. It’s absolutely nuts to tell by the tracks of an animal its sex, age, speed, physical condition, time of passing and even whether it’s hungry, angry or lonely.

“All activities happening in the bush tell you a certain story, my friend. Whether it’s the behavior of birds, the funny smell of carcasses, the directions of the wind, the conditions of vegetation and the tracks of any other animal around. Talk to the bush, and the bush talks back”, Words of Kane.

The next 7 days we followed the rising and setting of the sun and our lives revolved around a very basic schedule. The only moment that really mattered was the here and now. We engaged with our senses more than ever before, when walking, when eating, when talking and even when sleeping. As a result, we connected, with each other, with our environment, when the animals and even with ourselves. Trust me, there’s something utterly stimulating to living out in a place where you have zero cell phone reception, zero connection to the outside world. It’s calming, it enhances well-being and puts things in perspective. 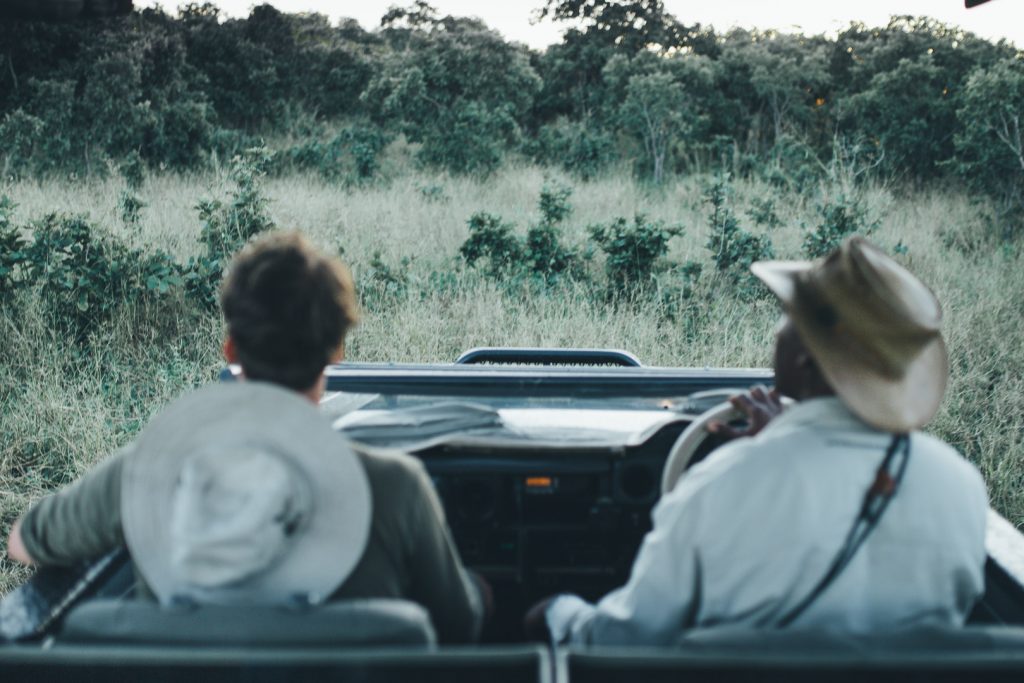 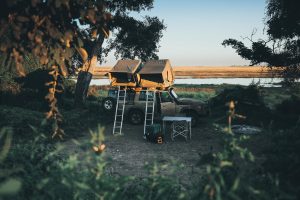 On one of these calm mornings, while sitting in a wooden ‘Mokoro’ being pushed forward by Kefentse, one of the local villagers Kane used to hunt with when they where young boys, only a few hours of conversation where enough to realize the strong connection these people are having with their surroundings. But a sudden encounter with a 3000kg bull was enough to keep our minds from drifting away. Once more, a friendly reminder that losing your senses could become fatal pretty quickly.

After seeing it from the air, from the water, and from the safety of our game driver, it was finally time to set foot in Big-5-territory in the way it has been done for hundreds of thousands of years, by foot.

A walking safari in these conditions puts you in a mental state of being I haven’t experienced before. A prehistoric state of alertness. An oxpecker suddenly flying off probably indicates there’s a herd of buffalo behind the bushes, a distant rumble might warn you there’s an elephant at the waterhole or a barking Kudu means a lion is ready to ambush. Tracking signs smell and footprints of wild predators and analyzing your environment step by step forces you to lose control, connect to your environment and let the bush do the rest, oftentimes resulting in eye-to-eye stare downs with lions, elephants, and buffalos. 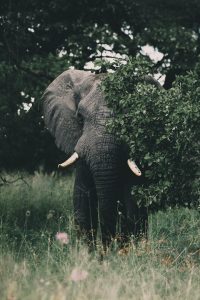 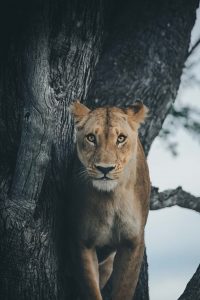 Kane tells us the secret is ‘letting go’.

After a few hours of walking through the bush, I realize some things happen just because they happen, without having an impact on it and I firmly believe the best way to deal with this is to accept that sometimes trust has to take over fear.

Another important ‘bush lesson’ to bring home. To a world that’s so guarded and full of fear that trust is oftentimes hard to find. A world where a growing majority of people actually don’t take time to listen to their environment anymore but rather wait for the next gap in a conversation in order to share what they know, what they feel or what they have.

But if everybody’s talking, who is left to listen?

And while lying in my tent at night listening to the sounds of chirping crickets, I once again realize there’s so much more to learn from these people than I could have ever imagined. 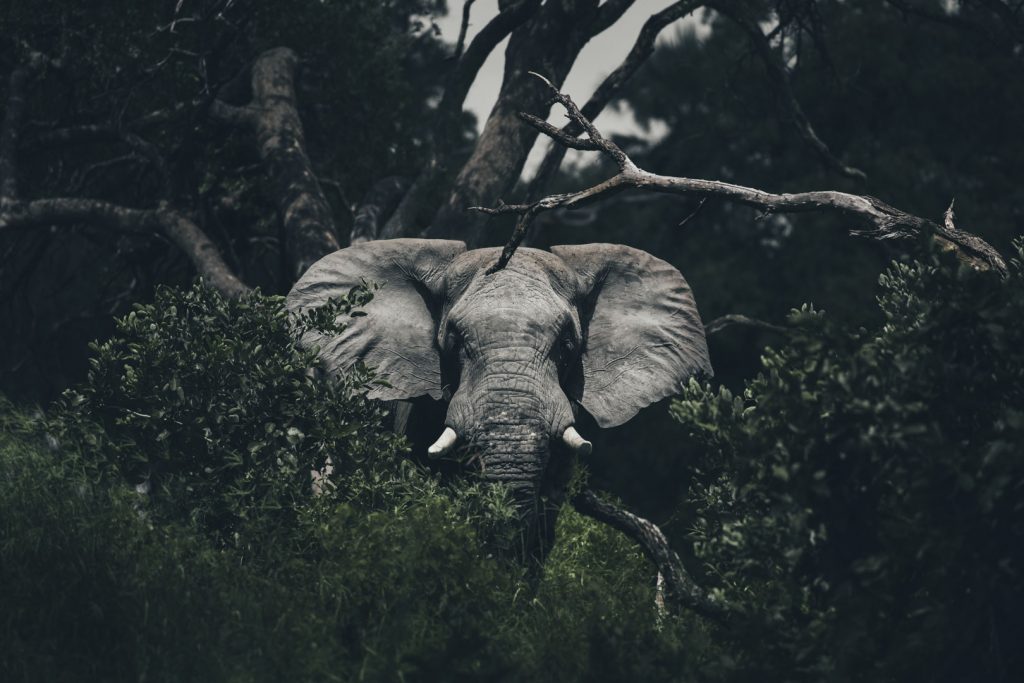 When the night falls;

It feels like the entire bush escapes from the sun and the heat of the day when the night falls. All predators appear and everyone and everything becomes alert. You smell and hear more because you see less. The moment the sun drops below the horizon, all sound disappears and for 1 single moment, the entire bush becomes quiet. In just under 30 minutes Paradise becomes Prehistory. Day becomes night. I’ll never forget the sound of roaring lions next to our tent on the first night. It has been one of the scariest things I’ve experienced in a very long time. It’s like being called from the Ice Age. Even 2km away, it resonates in your bones, vibrations that make you shiver. 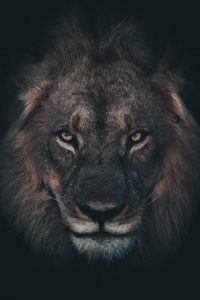 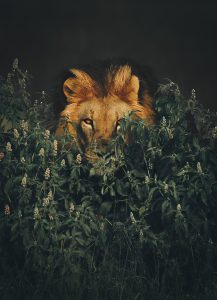 After spending some time disconnecting from our busy speedy lives back home and reorganizing our systems to the rhythm of the bush, it became pretty clear that..

The true essence of life is not what the Western world makes you believe, it is experiencing this raw connection with nature first-hand.

It puts things back in perspective, where they belong. The vulnerability, the immense power of instinct, the strong presence of purpose and the joy of the little things. All happening in a world where everything seems bigger than yourself. Africa, you did it. Again. 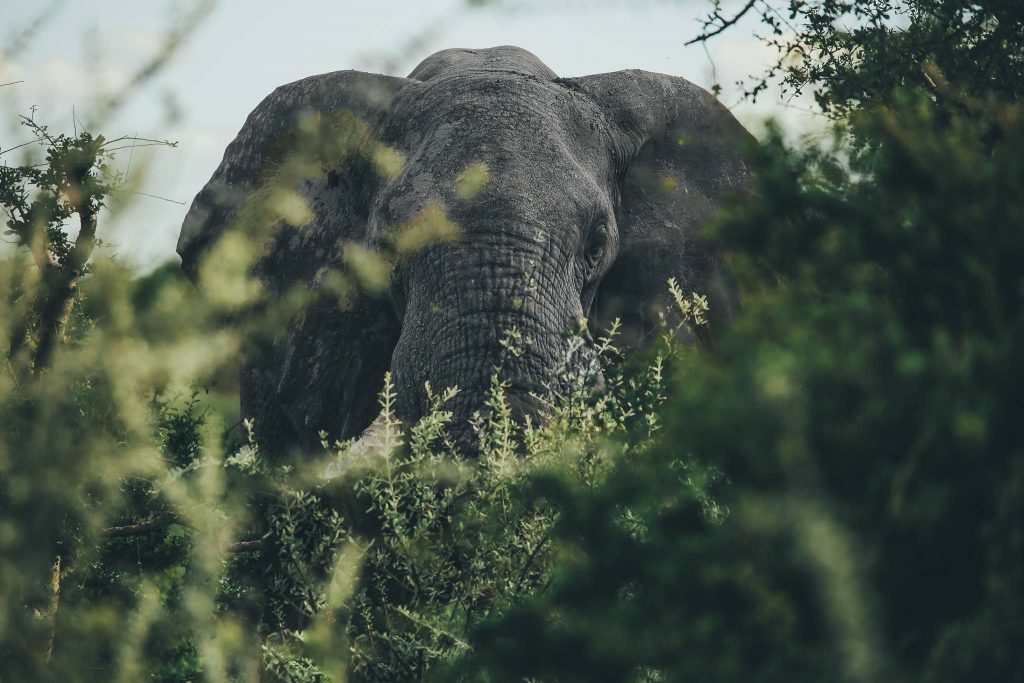 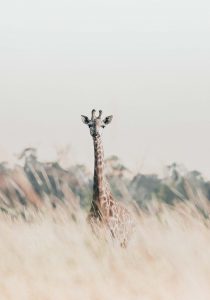 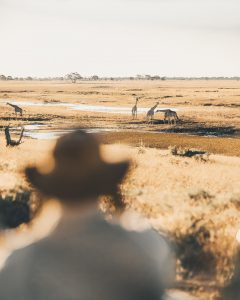 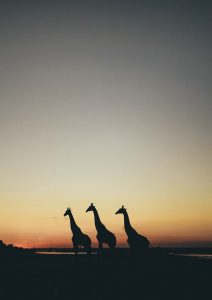 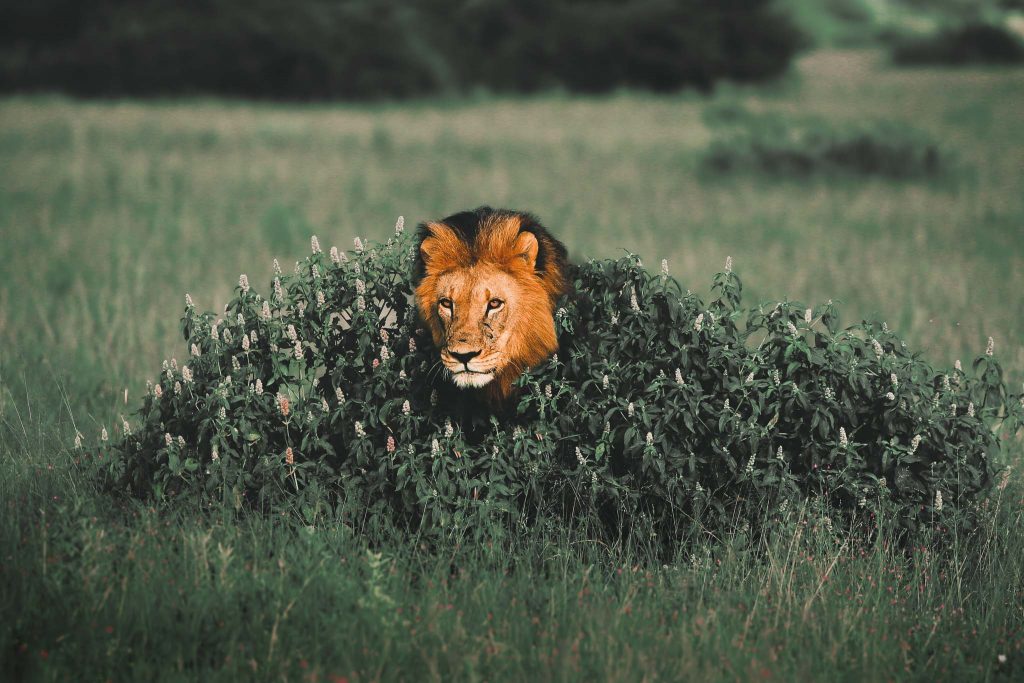 Call me a hippie but all everything I said about this place is true. You can shake the sand from your shoes, but not from your soul.

Thank you for sharing this experience with me! I truly hope that are inspired to get out and find the places that challenge your understanding of life and warm your soul.  Comment below and let me know what you thought! 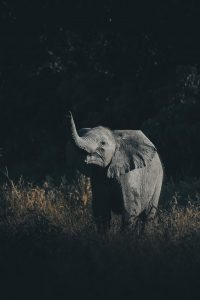