From Sunrise to Sunset – 12 Hours in Yosemite 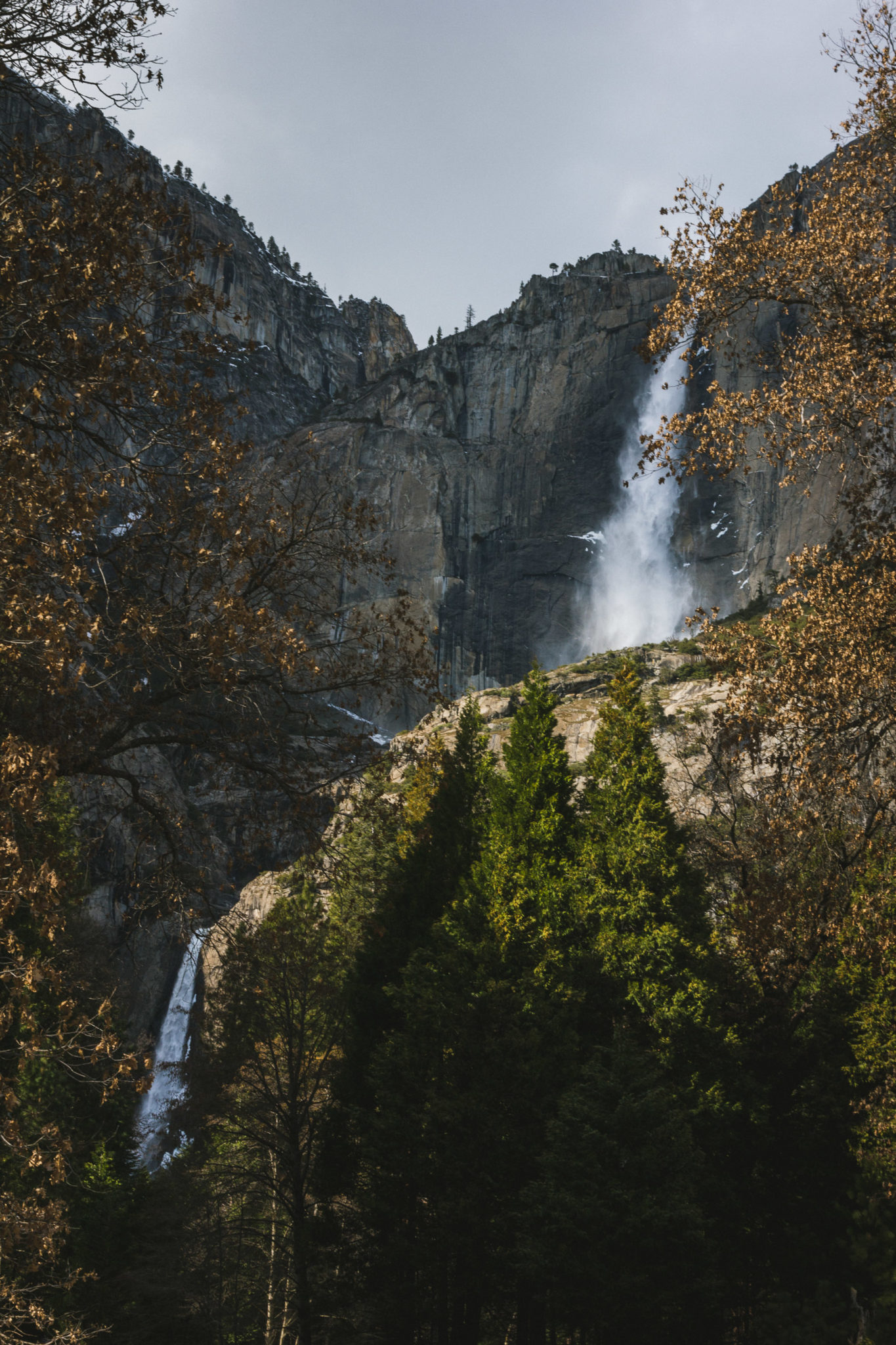 It was a wet winter here for us Californians. For months the rain fell, creating seamless blankets of water on the ground bringing life to plants that had been dormant for years. At sea level, this meant crumbling roads, longer morning commutes, and an increase in Netflix subscriptions. City folks don’t seem to handle to rain very well. For the granite walls looming 13,000 feet above the valley floor, this meant snowcapped peaks untouched by anyone other than nature herself. It meant fresh deer tracks creating perfect imperfections in what would otherwise be a silky eight-mile sheet of snow draped across the valley floor. It meant that somewhere, off in the distance, almost drowned out by the sound of software engineers clicking away on their mechanical keyboards three desks over, and underneath the rumble of the city three floors down, Yosemite was calling and rest assured I was listening…

I had been waiting for what felt like an eternity for a gap in the weather – all I needed was 24 hours with no rain or snow. On the afternoon of February 23rd I checked the weather and in less that 48 hours I would be standing at the foot of El Capitan. I got the break I was looking for.

[2:00:00 AM] The alarm goes off, but like a kid on Christmas Eve, I wasn’t asleep. I’d been dreaming about the valley for years and given that I was less than four hours away from stepping foot in one of the most beautiful national parks on the planet, I was losing it. I walked downstairs and scarfed down breakfast, knowing me it was two pieces of burnt toast topped with two fried eggs, avocado, and Frank’s Red Hot hot sauce. Now if this were a movie you would skip this part, so I’ll do it for you…I got in my car and drove for four hours, it was dark, I ate half a bag of almonds…the lightly salted kind of course because my mom says I need to watch my sodium. 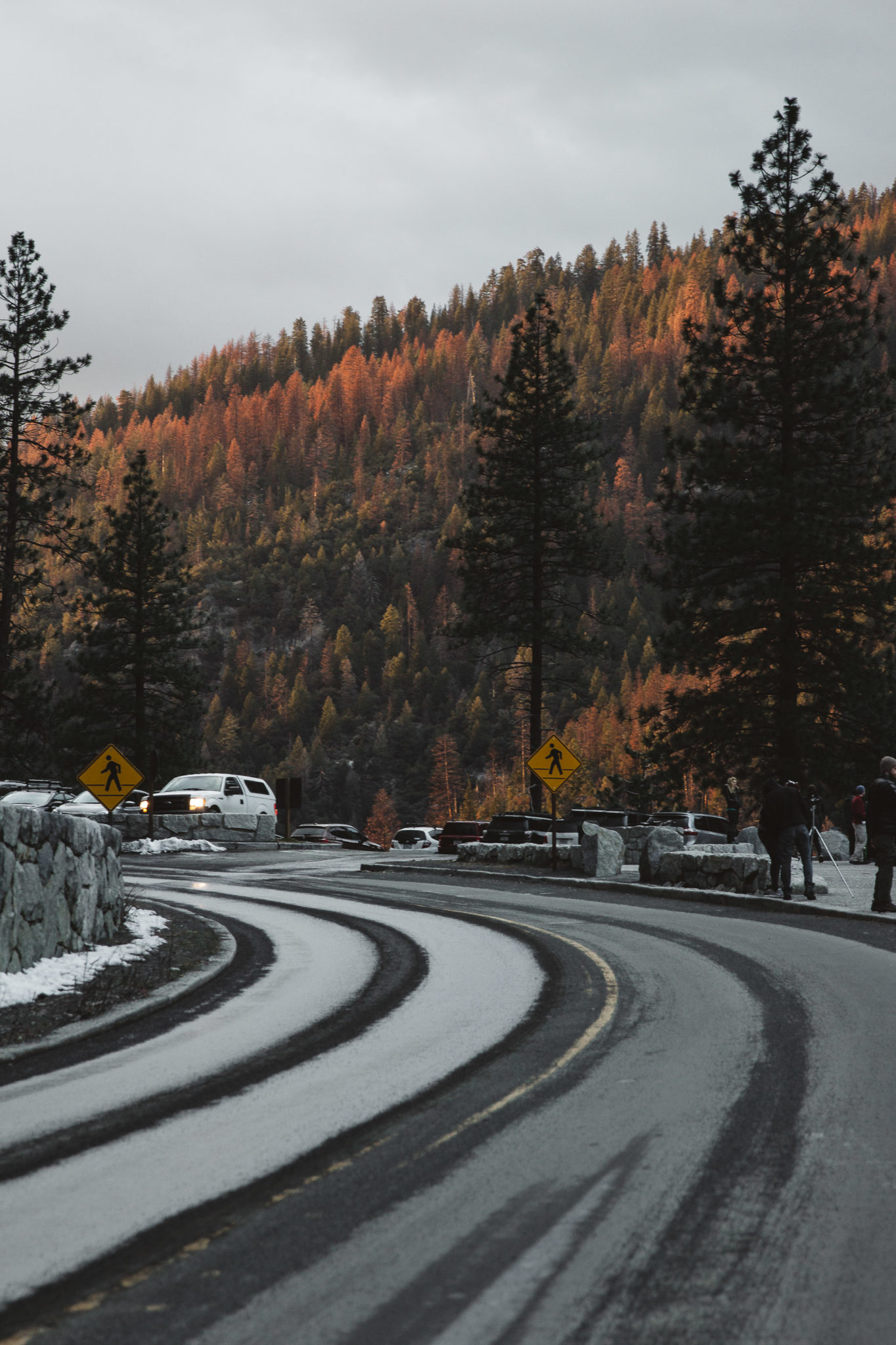 [5:15:00 AM] I drove past the ranger booth, but there was no one inside. My plan was to catch the sunrise at tunnel view and clearly, I wasn’t the only one with that brilliant idea. I made the right onto Wawona and drove up the road for another couple miles until I reached the parking lot. I got out of the car and went to put my gloves on and I must have been overwhelmed with excitement because when I looked down my left glove was swimming in the puddle of melted snow at my feet. Rather than try and push my way through the dense row of photographers and tripods smeared against the stone ledge that separates the road from the cliff side leading down to the valley floor, I set my phone up for a time lapse, found a comfortable seat, and took it all in. As the sun rose and the frost from the night began to melt off the tree tops I made my way back down the road and went to Bridalveil Falls. The funny thing about the Valley is that you don’t really need a tour guide. Just look for crowds of people staring up with their jaws hanging wide open…it’s a sign you’re in the right place. 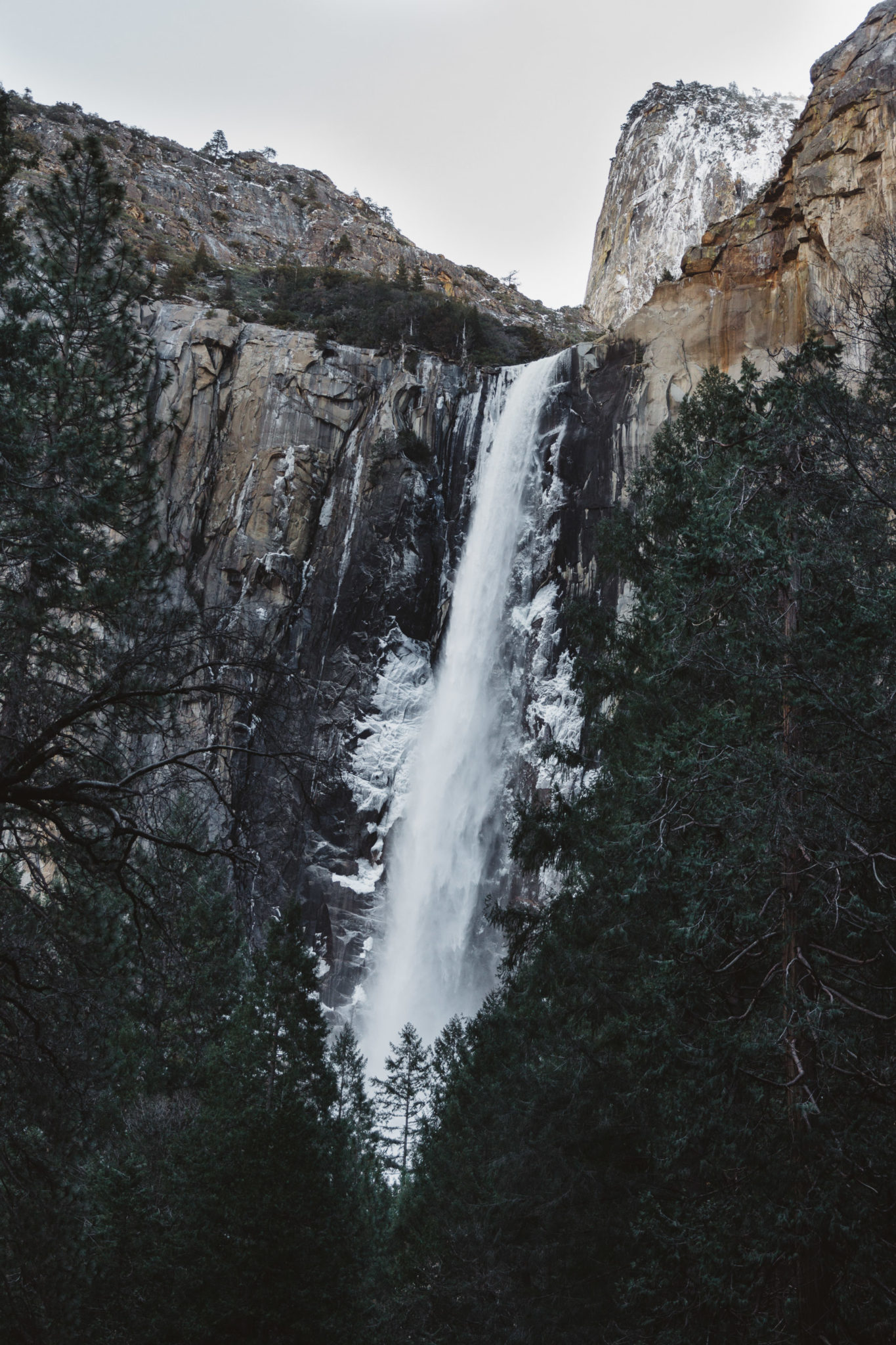 [6:00:00 AM] I got out of the car in the parking lot at the falls and walked in the direction I believed led to the base. The sun was up, but because the trees were so dense, the warmth hadn’t penetrated down to the floor. There were puddles of water with thin layers of ice on top…just like when you don’t leave the ice tray in the freezer long enough. I spent the next 15 minutes jumping in puddles of ice water just to hear the thin layer of ice on top crack beneath my feet. I felt like a kid popping the tiny air bubbles on packaging paper for the first time. After I realized that I should probably leave some for the next curious lad to jump on and enjoy, I continued toward the falls. The path up to the falls was covered in ice. The mist from the falls had frozen which meant I was ice skating uphill, it was no easy feat. For those who haven’t done this, its two steps forward and a whole lot of sliding back. After managing to make it up the path I finally had the falls to myself. Everybody was smart enough to remember that they also had to make it back down the frozen slope which was equally if not more difficult than coming up.

The falls are unexplainable, no string of words regardless of how poetically crafted can do the sight justice. The sun glistens off the water, and the snow accumulates around the edges, just out of the flow’s reach. The rock wall is two toned. Dark gray where the water flows over and down the 600-foot face, and an almost warm sandy color everywhere else. Here I am surrounded by snow covered rocks, at the base of a 600-foot waterfall and there is not another person in sight. I snapped some photos and started. Something about standing there, alone, in front of such a powerful force, it did something to me, it was humbling. I could have stood there all day trapped in her trance, my eyes locked on the water rushing out over the edge, but I knew I only had one day and there was so much more to see.

[10:00:00 AM] By this time, I had been up for eight hours or so and was ready for some food. I grabbed a salad from the village store and drove around looking for a spot to eat when I stumbled across this view. Needless to say, the salad wasn’t the highlight of my lunch. 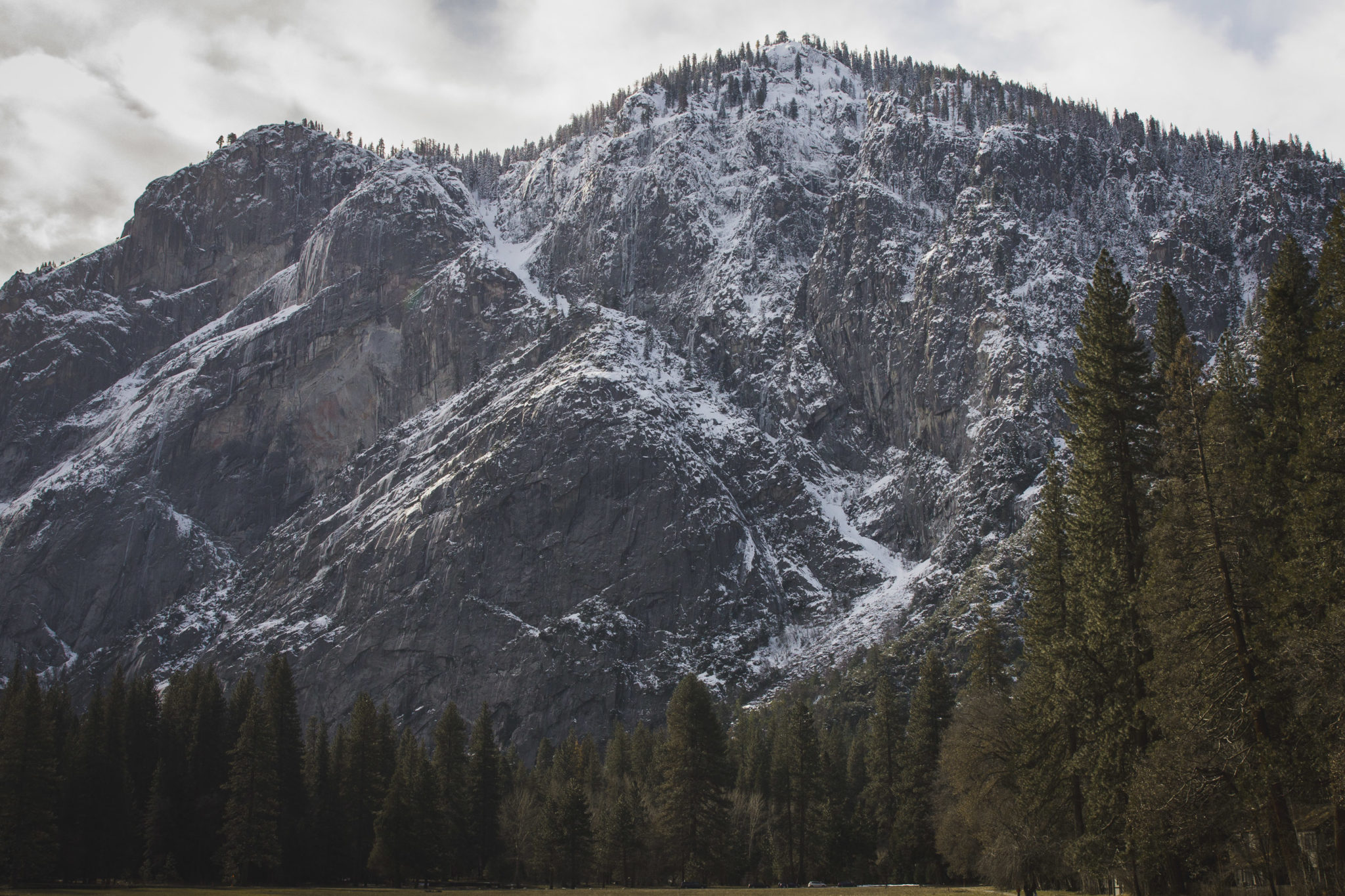 I finished my salad, polished off my bag of almonds and ventured toward the half dome. The recent snowfall and winter road closures limited the hikes I could do, something to keep in mind if you’re visiting during the winter months. I decided to hike the three-mile loop around Mirror Lake. If you ever find yourself in the Valley – take the shuttle or bike because parking is ungodly difficult and only gets worse as the weather gets better. I parked my car at the nearest parking lot and began walking towards the trail.  I walked for no more than fifteen minutes when I realized I was completely alone, again, encapsulated by the beauty of the woods. It also had a very creepy aura about it, so given that I was alone, I kept moving. I rounded a bend and the trail opened up to a large field which seemed like it would have been submerged had the water level been higher. This whole time I had my back turned to Half Dome…and then I turned around. As your eyes race from the floor directly in front of you up the tree trunks and back to the face of the wall, you begin to realize that in the light, the granite has an orange/purple tint to it. As you move further up the face, the trees become smaller and smaller, and finally as you near the top half of the giant, it becomes a blank slab of history, leaning out eight thousand feet above the lake below.

[1:00:00PM] By now a few more hours had passed and both my camera and I needed fuel. I went back to the village, got a meal, and charged my battery. I was exhausted but had a couple more stops to make before I could call it a day.

[2:00:00 PM] I got back in the car and drove to Yosemite Falls. This was by far the most crowded spot I had been all day. I got a parking spot and made the short walk to the trailhead. Unfortunately, due to the weather and the mist from the falls, the path was deemed unsafe and the trail was closed. Luckily everything is so massive in the valley that you could see the falls from the road, and even from a distance they were quite the sight. They were staggered, one above the other as to show that uniquely they were majestic free flowing landmarks, but together they created a force so powerful it demands your attention from any point in the park from which they are visible. When I planned this trip, and by planning, I mean checked the weather on Thursday and decided to make the trip, I hadn’t thought about the fact that the roads leading up to the high country had long been closed for the winter. At this point, it was around three o’clock, and given the fact that I wouldn’t be catching the sunset in the high country, I headed back to Tunnel View. Something about watching the sun rise and set from the same place, it just seemed fitting, like the day was coming full circle.

[3:15:00 PM] I pulled back into the parking lot off Wawona Road, turned off the car, and fell asleep. Luckily it was only a 20-minute nap so don’t worry, I didn’t miss the sunset. As the sun began to set behind me and the light faded away, the shadows crept in. And then, as if I needed anything else to round out the nearly perfect day…it started to snow. The shadows continued to creep in starting at the peak of El Cap. and like a dark fog, rolled down the mountain’s face. As the light continued to vanish, the temperature dropped. The warmth that only hours ago melted frost off the trees was fading away. The thin layers of ice atop the puddles in the Bridalveil parking lot were freezing over, readying themselves for tomorrow’s wanderer. The valley turned into a dark abyss, and the lights from the campfires below slowly began to shine through the trees. I got in my car and left, back to the crumbling roads, back to the morning traffic. Back to the software engineers hammering away at their keyboards…but I left a part of me in that valley and the next time she calls…I’ll be listening.

Thank you for reading, please comment below if you enjoyed this post! More on the Yosemite National Park HERE.