No Lens, No Problem: How to Turn (Almost) Anything Into a Pinhole Camera.

Sometimes, it’s refreshing to get back to the basics. Especially in a world oversaturated with new cameras, ever sharper lenses, bigger and better sensors — it can be nice to take a step back and remember how fun photography can be at its most basic level.  And I do mean basic. Like, just a box with a hole in it kind of basic.

Pinhole cameras are at the foundation of photography as a technology. In fact, they predate it by several thousand years! We’ve found written descriptions of them all the way back to ancient Greece. And certainly when Nicéphore Niépce captured the oldest surviving photograph on his rooftop in 1826, it was using a pinhole camera.

The oldest surviving photograph, taken with a pinhole camera by Nicéphore Niépce

We won’t dwell on the technicalities, but in essence a pinhole camera is a closed, dark chamber with a tiny aperture letting light in. That’s all you need to get an image through the camera obscura effect. Through pure physics, an image of whats in front of the aperture gets projected upside down onto the back of the chamber. No lens, no shutter. Just a hole. If you want to capture the image, you’ll need a light sensitive material inside. But if you build a pinhole camera large enough for you to be in, then all you need is your eyes! 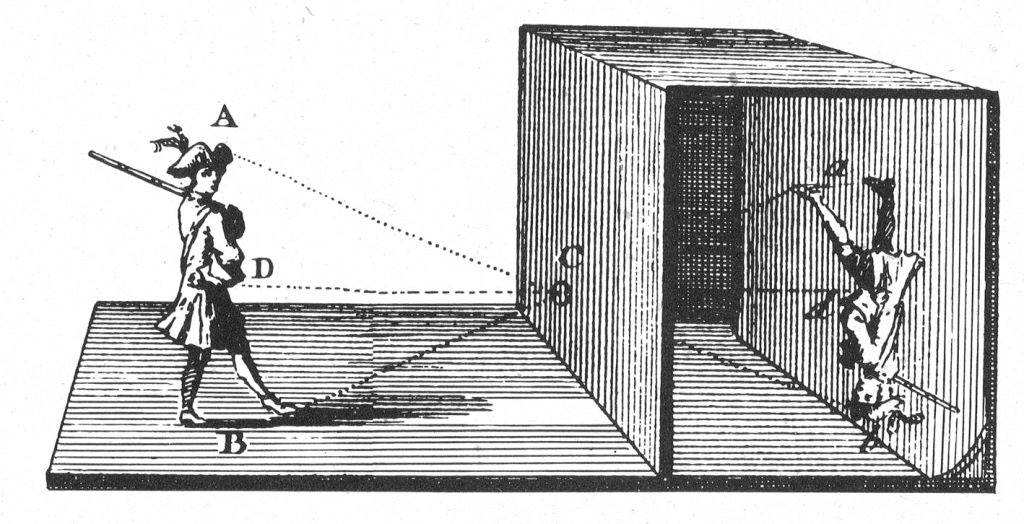 Here is a partial list of ways you can play with pinhole cameras, from small to humongous! 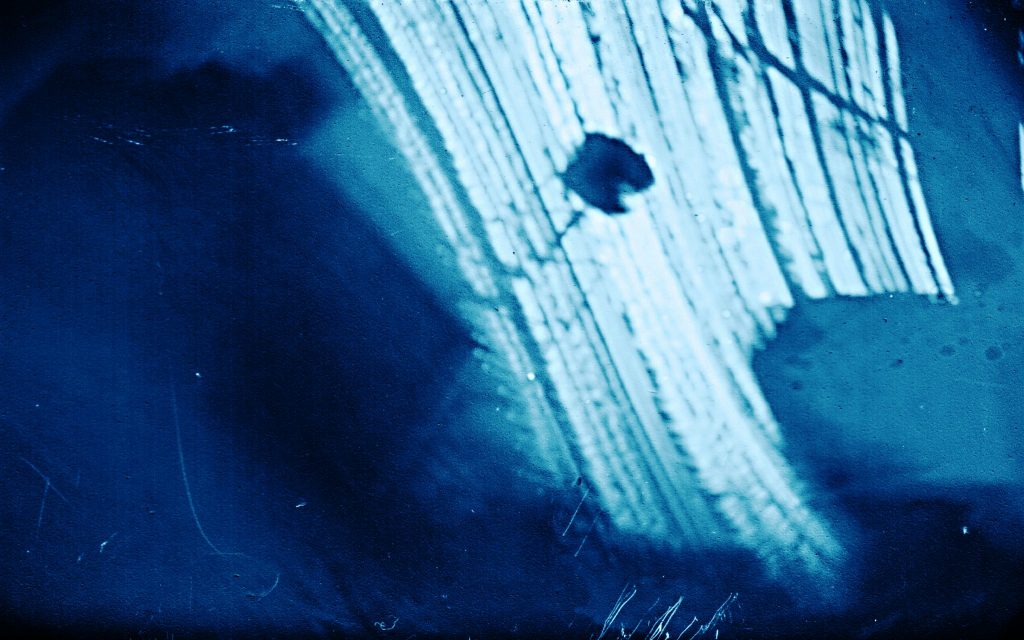 A solargraph captured in Greepoint, Brooklyn.

A solargraph is a pinhole camera that uses the sun to expose itself. The above image was taken over 6 months in Greenpoint, Brooklyn. Those lines across the sky are the trajectory of the sun each day during that time. This is a lo-fi and  tiny as a camera can get: I built it using an empty film canister (because they are light-tight) with a tiny hole poked into it for an aperture. The image itself is not being captured on film, but black and white photo paper. Like the kind you use in a dark room to print an image onto. The fact that photo paper takes way longer to expose than film means you can use it to get one exposure over six months!

Now, there’s a few caveats to this. First of all, it’s a super imprecise technique, so it’ll take a lot of trial and error to get a real good exposure. And when you’re shooting for six months per shot, trial and error is a long process. Also, it does require attaching little pinhole cameras to one set, possibly public, place for 6 months. So be sure you’re not doing this in a way that seems suspicious- public art installations have triggered bomb scares more than once before.

Below you can see what my pinhole camera looked like. 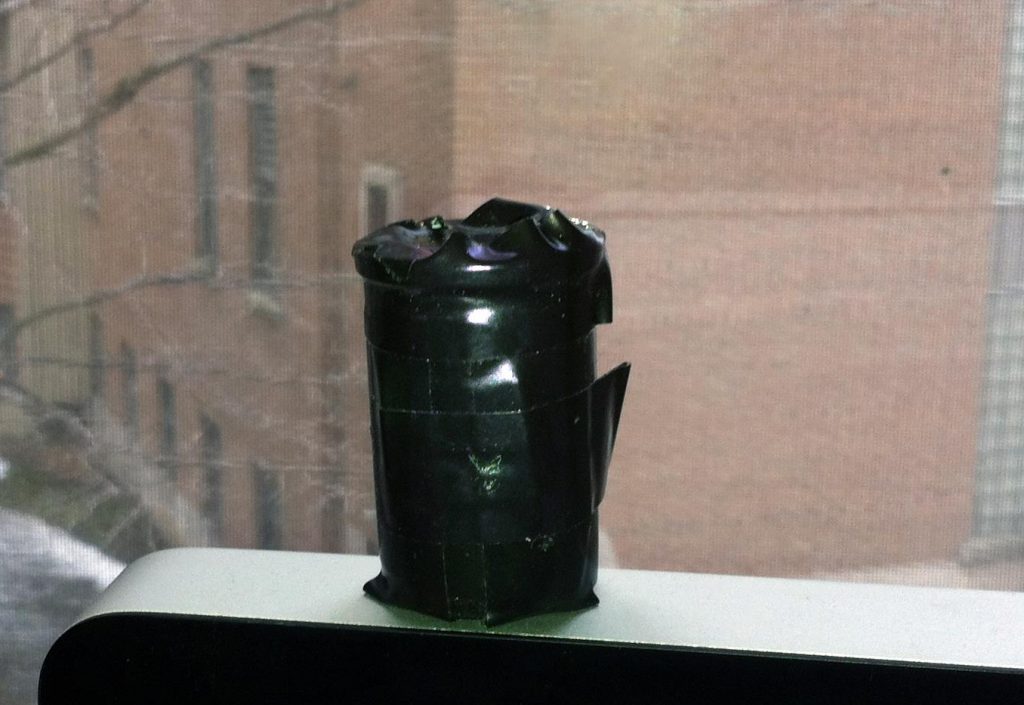 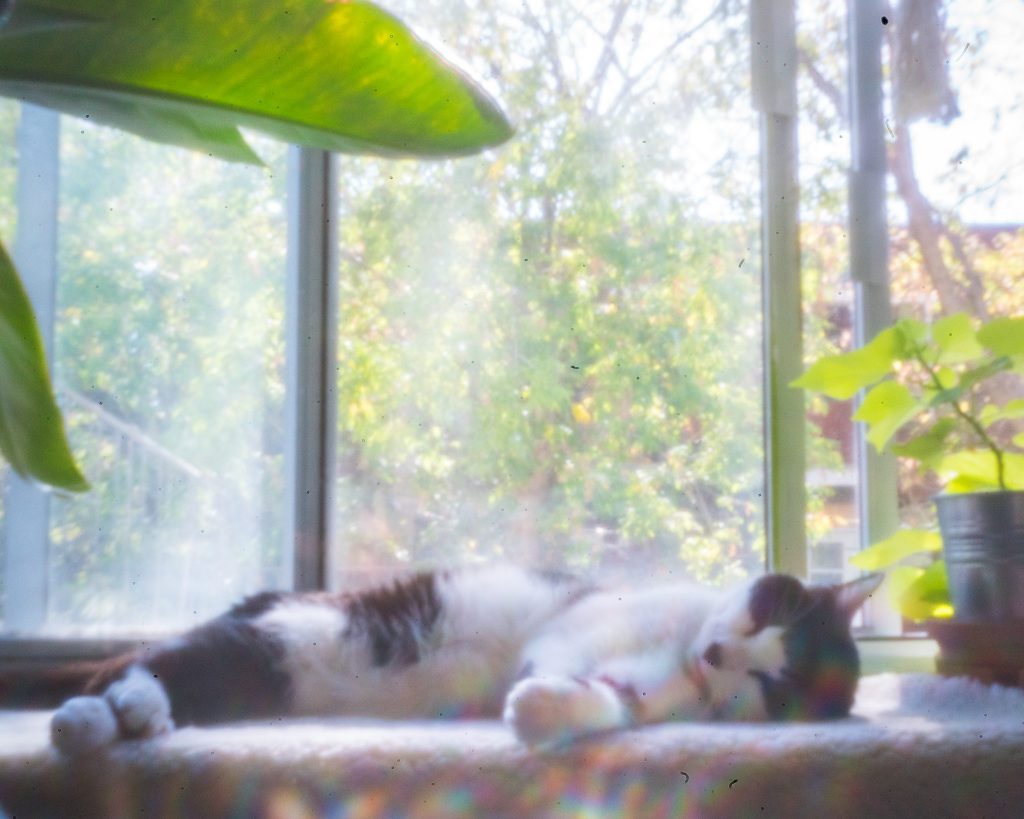 A pinhole shot capture on the A7rii

If you’re not feeling so arts and craftsy, there are more readymade solutions. You can actually buy a camera cap that has a pinhole cut into it, which you can then just put right over your digital SLR or mirrorless camera to turn it into a camera obscura. Who would’ve thought that you could shoot on that fancy A7 without a lens?

Shooting this way will get you that characteristic pinhole look. You get, for example, infinite focus- yet nothing looks perfectly sharp. You’ll also need to shoot with a long shutter given how small the aperture is, so you’ll get all the fun and challenges that come along with long exposure. And maybe most awesomely: you can get those crazy colorful flares that only a pinhole can get you! 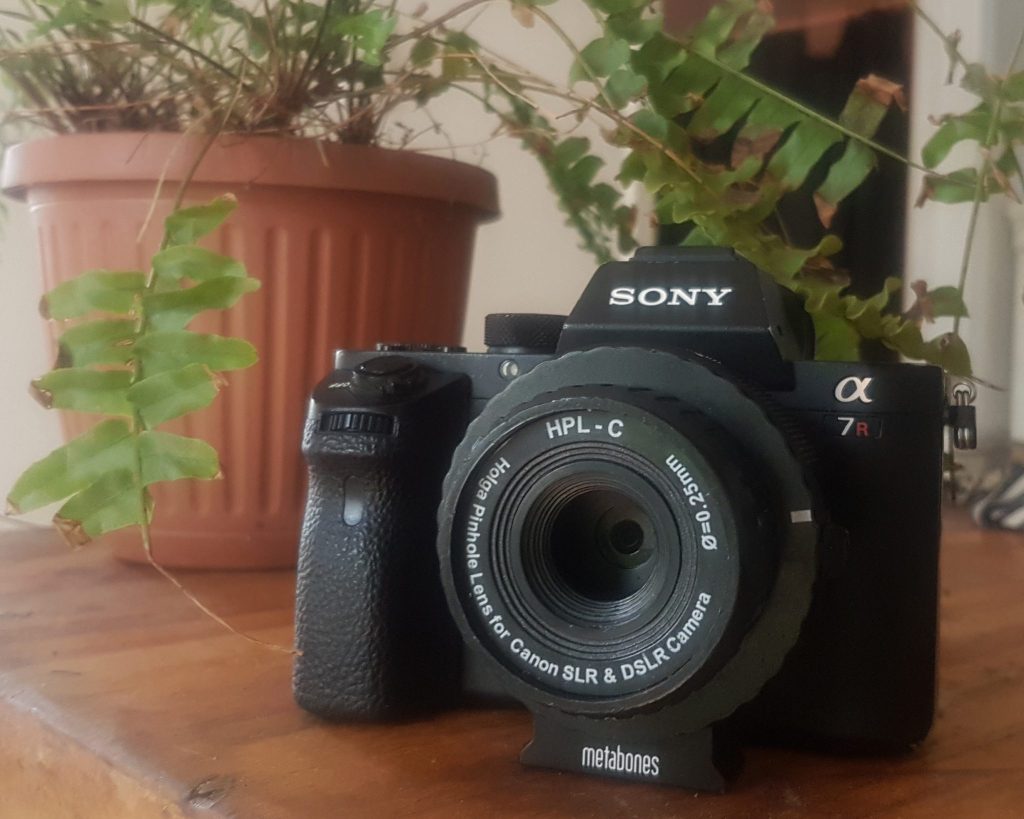 A sony A7rii with a pinhole cap

My studio turned into a camera obscura

The above pinhole experiments are fun, but this one is just magic. Given that a pinhole is just a closed chamber with a hole in it, there’s really no limit to how big you can go with it.  In the above image, I turned my studio into a giant pinhole camera simply by covering the windows with cardboard and black garbage bags to cut out light. Then, right in the middle of the windows, I poked a tiny hole through the cardboard, and increased it a bit at a time until i noticed an image start to form on my walls.

It seems counterintuitive that this is all you need to get a projected image, but it’s true! The image will be upside of course, because of, well, physics. And it will be dim with the naked eye- as I mentioned above, you generally need a long exposure to capture the image. But sit in the dark for a few minutes and your eyes will adjust, and just like that, the outside world will be dancing on your walls. 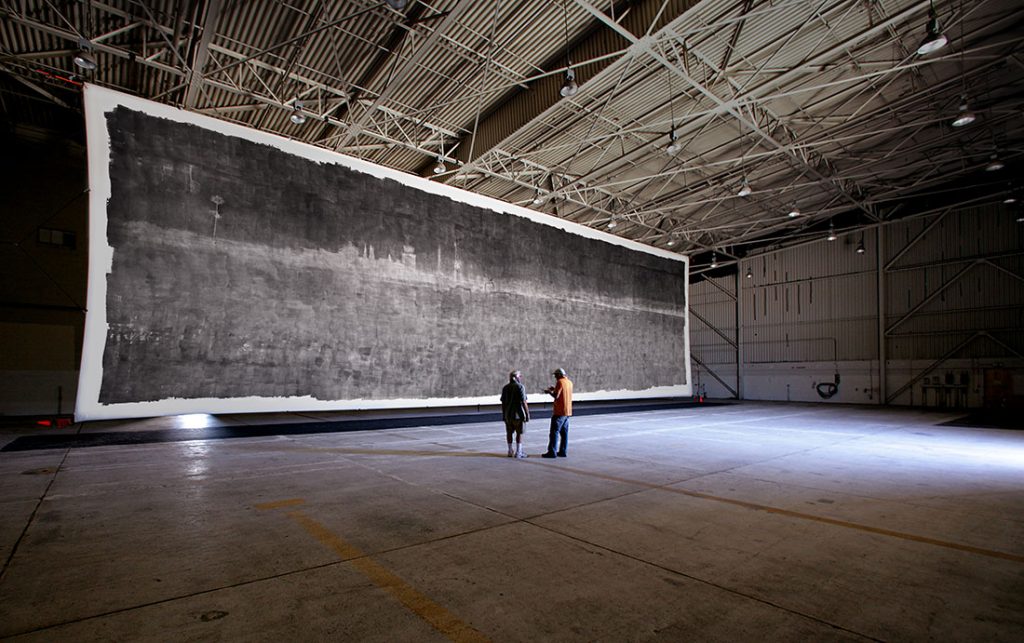 If you happen to have a spare, empty airplane hangar lying around, you can even use your pinhole experiment to try to challenge the record for the world’s largest photo! Using exactly the same logic as above, plus hanging a giant 45x160x80 foot tarp covered with light sensitive material, the team at the Legacy Project captured this enormous print! Mind-blowing.

It all goes to show: No lens, no problem. Have fun turning anything and everything into pinholes! Please feel free to tag me in your shots on instagram so i can see your awesome work!